Snapshots: Awareness, Sense of Self, and Love of Others and Life 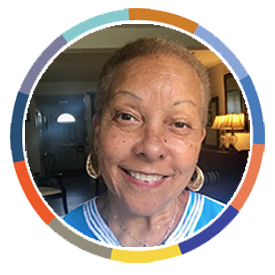 I’ve gained an expanding awareness of “life’s many realities” as a result of growing up in my neighborhood and times. I’ve left Washington, D.C., and returned several times. I’ve read widely. I’m always thinking. I appreciate how people are different. As a result, I’ve developed confidence in myself and what I could do. I have a clear vision of myself.  While I didn’t have a clear vision of what I can do when growing up, today I have an inner strength that allows me to stay calm regardless of what life throws my way. Yes, life changes. That’s life. And, I’m okay with that. Fifty-three years after graduating from high school, I am still here. I work diligently to stay healthy. I share when I can. And I always love life and living.

What Happened While In High School

Our Neighborhood Changes. Our Family Stayed

Looking back, I was aware of what I now know as the harmful effects of racially-based housing and other economic policies. Now I know that public and private urban renewal programs were causing blacks to move out of one area and into another and facilitating “white flight.”

What did I see then?

My family stayed. My parent’s response was to send me to high school in another part of the city.

By high school, my father would tell me to spot my surroundings when I walk along the street.  He said, be aware of movements when I am by myself and not let anyone get close to me when I am walking alone.  He told me not to walk through The Village anymore.  Instead, walk to Brentwood Road and quickly walk up to 13th Place.  And so, without questioning my father, I changed the way I walked home.

When I began to attend Western High school, I began to learn how “to navigate:”

Like my changing neighborhood, I became increasingly aware of how teachers’ behaviors got played out in my schools, particularly when I remembered the strong, nurturing environment of my elementary and junior high days.

I became aware of the effect that “teachers with favorites” had on other students and me.

Later in my professional career, I remembered the effects of teacher behaviors as I supervised teachers..

Started Working & Learning On My Own

By the end of 10th grade, the counselor got me a job at C & P Telephone Company on 13th Street, N.W.  She reconfigured my class schedule, so I was out of school earlier in the school day.

On days that I did not work, I would spend my time reading at one of the tables in the Library of Congress or walk through the underground areas, which were open and accessible at that time.

An Expanding Political and Social Awareness

Added to my awareness of demographic and socio-changes and differences, the positive and negative effects a teacher could have on their students were the political and cultural events of the day.

Because of The Vietnam War, many of my friends from the neighborhood were drafted.  Eddie Downs, one of my first crushes from elementary and junior high schools, was drafted while in high school.  They said he might have been older than we were. He was the first of many boys from my neighborhood to die in the war.

There were many other boys, my friends, who became hooked on drugs that were being pushed into our neighborhood.

I was becoming aware of the effects on me of the changing socioeconomics, a non-nurturing school environment, the killing of black leaders, exposure to the ideas of Malcolm X,  Viet Nam War, and drugs in my community.

What Happened After High School

First Steps Towards An Undergraduate Degree

While in high school, I applied to Howard University and was accepted into the School of  Electrical Engineering.   This was another period of expanding awareness.

Upset by these shootings, frustrated with earning C’s, and turned off by Howard’s registration process, I decided to leave Howard and move to New York City to dance.

Leaving College Early & Expanding My Sense Of Self

In NYC, I began to get an expanded sense of self:

My Mother’s Death & My Return To College

The unexpected death of my mother was a “reality check.” I returned to D.C. and forced myself to graduate from Howard. I worked at a temporary agency for my tuition. I didn’t let Howard’s registration process frustrate me.

I earned a degree in finance and certified in secondary mathematics.

My teaching certification was the first “game-changer” for me. I was motivated to influence the teaching and learning process which did not have teaching standards at that time.

In the early 1980s, Senator Specter spearheaded a program to educate and train prison inmates.  The program paid D.C. teachers well. Applied and took the job my first summer.  In training, we were instructed to wear loose-fitting clothing and deemphasize our looks with no makeup, jewelry, or ornaments.  After training another young white woman, a young black man and I were assigned to teach in the maximum facility.  I was in my early 30’s at the time.

Entering the facility unsettled me. It hurt me to see some of the most handsome black men of different ages, shapes, and colors housed in one place.

These were our instructions:

When I was interested in the background of inmates, a guard would escort me to view the records of inmates in my class.

What did I feel?

Eventually, U. S. Senator Arlene Specter’s program lost its funding.  Harshly criticized, Spector lost support for his position that inmates should be educated while they are in prison. I disagreed with the decision.  First, learning would give inmates a distraction.  And second, learning would also encourage them to think – an essential component for growth.

Teaching and including all students

From my experience with teaching at Lorton, my professional career revolved around me, improving the way I and others taught.

I returned to an environment where I could supervise teachers.  When needed during teacher observations, I would draw the diagram of the seating arrangement of boys and girls.  I would put a notation each time the teacher called on a boy or girl. I would draw arrows indicating the direction the teacher looked when she/he taught the lesson. I would share the diagram at the observation conference and solicit feedback from the teacher. Teachers were able to identify the students they repeatedly called on, and students who were not included, during instruction.

The simple sharing of the diagram motivated a change in behavior of many teachers throughout my career.

I Can See Clearly Now

Today, I have a clear vision of myself.  I’ve had lots of awareness-expanding experiences, including more recent ones as a hospice volunteer.  And for many years now, I’ve not been “that turned-off high school student” who would not stand up, speak up, or persevere.

I now have inner strength. I can stay calm with whatever life throws my way. Yes, life changes. Sometimes it seems like we’re in unbearable situations. But that’s the reality of living. And, it’s okay. I’m still here. I work diligently to stay healthy, share if I can, and will always grab life and living.