I Learned Who I Am: Musings Of A 1969 High School Graduate 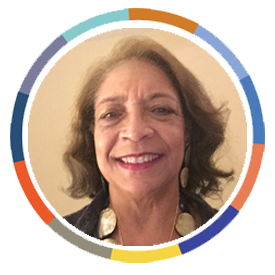 I found my identity amidst rapid demographic, social, and political changes. The assassination of Dr. Martin Luther King, Jr. The rise of Washington DC as “Chocolate City.” Going away to college. The rising and waning of local black political power. Being Black and female in racist & sexist organizations. Witnessing racism continuously raising its ugly head… And more…. In my 51 years since high school, I have changed in many ways, while remaining the same. I have grown; I have been educated; I’ve known several different worlds; I have learned who I am. And I am happy, at peace, enjoying life and family, and am gladly looking forward to my next couple of decades.

The assassination of Martin Luther King, Jr. stirred a new way of thinking and seeing for me.

The racial unrest that followed through the summer of 1968 was firmly imprinted into my consciousness as I began my senior year of high school.  It awakened me to my Black identity.  I always knew that I was Negro/colored, but that had never directly, consciously, impacted me before.  Black America was now making its voice heard, demanding the rights due us – now!  And we were no longer going about it non-violently. “By any means necessary,” was how African American youth were going to obtain them.  The blinders had been removed from my life.

When I entered Calvin Coolidge Senior High School in 1965, the school was still pretty much integrated and had a white principal. By my graduation, people of color comprised of over 95% of the school, the overwhelming majority of whom were Black, as was the principal.

Coolidge was still considered “a good school,” among the top three D.C. public high schools, but the margin of academic prowess between it and Woodrow Wilson High School grew tremendously.

A couple of years later, Wilson had been designated the local high school for my neighborhood, North Portal Estates.

My First Act of Rebellion

Having been raised in a Black middle-class family, there was never a question about me going to college. The only questions: Which school? What major?  And that was a real dilemma.

I had always dreamed of becoming an engineer. By high school, I had selected a specialty in chemical engineering.  I possessed the requisite aptitude and skills and had always been interested in physics’ and chemistry’s natural laws.  But I was also a somewhat gifted musician, having received piano lessons since the age of 5, and having studied the cello through junior and senior high schools.  Before the cello, there were the three years of violin lessons, and even a summer tinkling around with the clarinet.

My 7th-grade music teacher wanted to steer some of the class violinists away from that instrument; he demonstrated the viola, which piqued my interest.  But, when he played the cello, I was hooked!  I had never heard a solo cello before, and I fell in love immediately with its tone, range, and sound.  I had progressed to 2nd chair in the D.C. Youth Symphony Orchestra by junior year in high school.

My newly enhanced Black consciousness caused me to think about my future, although I was not allowed to rationally and independently choose my path.

My parents’ Black middle-class aspirations would have me pursue music, but I wasn’t interested in teaching, and, at that time, professional performance opportunities were few and far between.  Science and math came naturally to me, and I had always excelled in those subjects.  Besides, I appreciated the neutral objectivity and exactness of those fields.

So, do I go to Oberlin Conservatory or Cornell?

Let’s just say: I could have thought out my decision better.  Math is math, but there is a difference in pursuing it through the vein of liberal arts vs. technology and practical application.  Eventually, I was able to meander my way back close to my natural calling, completing my undergraduate studies here at home at The George Washington University, with a double major in Applied Math and Physics, and a full battery of engineering classes under my belt.

And the lessons I learned along the way and beyond remain with me today. All education is valuable. There are various perspectives from which to examine anything!

I Was A “Two-fer” In The South

Early in my career, I was a “two-fer,” a Black woman working in a white man’s world.

I started my career working in the South as a “Process Development Engineer” in a textile manufacturing plant.  On my first day, my supervisor stated that he had “never had a colored person work for him other than at the house and fields.”

When I would first visit actual textile mills for quality control and application process testing, I had to have one of the senior, i.e., white and male, engineers accompany me to gain entry, despite the scheduled appointment.  I felt the sting of racism, and sexism, almost everywhere in my world then, but quickly learned how to rise above my dual essence.

Without an actual engineering degree, I was already on the bottom rung of my department’s professional ladder.  I had to work way harder, and smarter, than the others.  My co-workers would come to recognize me as a venerable colleague – if not an equal. After all, I wasn’t a real Southerner, a fact not lost on anyone.

Tiring of the constant struggle, I returned home to D.C. and settled into a government career.

I chose a job with the District Government over the Federal Government because it was at a higher grade, though outside my area of interest.  I began in the Department of Human Resources’ personnel office, and then to the Department of Transportation/Public Works administrative office, where I oversaw the establishment of DPW from the former Departments of Transportation, General Services, and Environmental Services.  I eventually became a Transportation Policy Officer, responsible for reviewing and approving development plans, proposed street and alley closings, and new transportation facilities for the city.

However, working in the District Government was another life-altering experience.  I was not attuned to the political bureaucracy and its machinations.  I wasn’t a member of any of the “clubs.” I was expendable.

Nascent Home Rule, which began in 1974, was a very heady time for Washington, DC residents, who readily grasped the reigns of electoral politics, even as limited as it was. The city was becoming known as “Chocolate City.” The D.C. black population surpassed 50% in 1957; that Black population growth continued until 1970, reaching 71%. As a result, the City had thrown off its old mores. New Washingtonians supplanted the “Old Guard,” and it’s never been the same, nor will it be again.

I left District Government after 16 years, did a three-year stint with the Commonwealth of Virginia (which didn’t realize the Civil War had ended with its loss), and completed my work life in Federal Government in 2015, and still in transportation.

Although Home Rule Washington was a more inclusive community, some of us native-born remained outsiders. There was an “in your face” pride that most residents embraced. Soon, however, for me, Home Rule Washington lost its way as it fell prey to the aura and specter of power. The new lions believed in their invincibility, while still under the thumb of an overseeing Congress. What happens to a dream deferred?  It imploded, and the dust still lingers.

I’m reflecting in August 2020. Now, the city is barely recognizable, as power has returned to those with whom it always had truly resided. By the beginning of this decade, the Black population in D.C. was just over 42%, and still declining.  The city is at a crossroads: Will it remain the cosmopolitan Hometown? Or, will it become a nakedly political transient melting pot of a metropolis?

I long for my Hometown, the city of neighborhoods, and communities.  You could tell a lot about a person just by knowing in which neighborhood they lived.  You could get an excellent education in the D.C. Public Schools, where Black teachers were the “cream of the crop.” You were exposed to social and class diversity via Sunday School and church services.  There was fun to be had, either free or at minimal cost, all around town.  There was music, all kinds of music, everywhere.  And you could venture into practically any neighborhood and not be afraid.

While attending my 50th high school class reunion last fall (2019), I was struck by the drastic changes among my 525 classmates of 1969, at least of those in attendance. Nearly a quarter was no longer among us, and we’ve lost several more in the intervening months.  Approximately half have remained in the D.C. metropolitan area, many returning after college away.  But I only recognized a hand full, even after they identified themselves. Time has ravaged the bodies of these Black, brown, yellow, and white people. And I’m certain that lifestyle has contributed to the physical toll, as well. Even those who are very successful, by anyone’s measure, look years beyond our age.

The global pandemic through which we now suffer has brought to the forefront the fundamental inequities of our society – education, health care, income parity, homeownership, nutrition and fitness, economic prosperity and wealth, criminal justice, social justice, land ownership, and so on. Perhaps it is this “despair,” coupled with the reemergence of blatant racism that has tapped into our fighting spirit. We should never tolerate State-sanctioned murder in our streets. But now we see racism’s face. No longer hidden, it’s staring straight at us.… Enough!

I stand with those who protest against police brutality against Blacks, but I also demand that we stand against those who are destroying our community from within. Black-on-Black violence is no more acceptable than segregationists and police violence against us. We must demonstrate that all Black lives matter. The police and the segregationists should not be killing us, and we should not be killing ourselves.

* It is not enough to designate a portion of a downtown street to the mantra. There must be re/investment in our neighborhoods while we still reside there, not after Blacks have been displaced.

* We must hold elected officials accountable for their policy and decision making. These official acts affect our lives positively and negatively

* We must teach our youth of the gains and losses of our people, from Reconstruction through the Civil Rights Eras. We must give them a historical foundation so they can build on past progress to make gains today and in the future.

* We must celebrate the centennial of women’s suffrage, while we’re anxious about retaining our current democratic voting rights.

* It’s past time to ensure that history is accurately presented and taught, with no distortion of the facts. The Civil War ended over 150 years ago, but we’re still fighting. The armed battles may have stopped, but the War continues.

As I Look Back

The isolation warranted by COVID-19 since the middle of March has been generous in allowing for reflection. In my 51 years since high school, I have changed in many ways, while remaining the same. I have grown; I have been educated; I’ve known several different worlds; I have learned who I am. And I am happy, at peace, enjoying life and family, and am gladly looking forward to my next couple of decades.