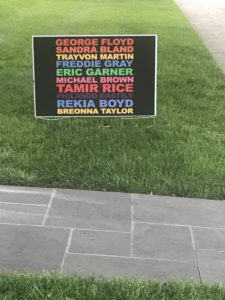 This sign beckons us to remember and say their names. I noticed it in a neighbor’s yard on 16th St. NW DC about two blocks south of the Circle during my Friday night my walk through my neighborhood. A week ago, neighbors had gathered along to support the resistance in the District.

There is a tradition of protesters lining 16th Street because it ends at Lafayette Park. The address of the White House is 1600 Pennsylvania Ave.

Historically, 16th Street is the city’s “Corridor of Light.”

In Anthony Browder’s “Egypt on the Potomac: A Guide to Decoding Egyptian Architecture,” on December 20, 1793, the 16th Street corridor became “the prime meridian for the District of Columbia and the nation.” Its official designation was: “Washington Meridian of the United States on December 20, 1793.”

Since 1793, 16th Street has been a “pathway of spiritual energy.” This meridian line is the position of the sun at high noon on the equinox. The layout of the District builds on this plane.

The equinox marks the two occasions during the year when day and night are of equal length all over the earth. According to ancient traditions, every building and object along a meridian line is infused with spiritual energy at solar noon — when the sun was “on high.”

In Kemet, the sun symbolized the Creator, and there were three names attributed to it. They described the three distinct positions of the sun as it moved from sunrise to noon to sunset. The sun was reborn in the east and was called Khepre. At noon when the sun reached its high­est point at the meridian, it was called Re. When the sunset, or died, in the west, it was called Amen.

The three Kemetic words, Khepre, Re, and Amen meant rebirth, the Most High and concealed, respectively. The priests of Kemet knew that Amen was concealed in the west and would be reborn in the morning as Khepre. These priests recognized that the sun was more than the Creator. It was a visible metaphor for the circle of life. The east represented birth, the west represented death, and the meridian represented a person or object at the peak of power.

According to Browder, “geographically and symbolically, the meridian is the most potent and important time of the day.”

The first  12  hours of each day are  Ante Meridiem “before the meridian” or A.M. The last 12 hours are Post Meridiem “after the meridian” or P.M. Noon– the midpoint of the day ­– the 60 seconds when Re is on high — is the focal point on which time revolves.

For now, along this “Corridor of Light.” we let the spirits of George Floyd, Sandra Bland, Trayvon Martin, Freddie Gray, Eric Garner, Micheal Brown, Tamir Rice, Philandro Castile, Rekia Boyd, and Breonna Taylor shine as their spirits fill us and guide us.

Note: For political reasons in 1884, Greenwich England became the prime meridian. This ties to the creation of Greenwich Mean Time (GMT).