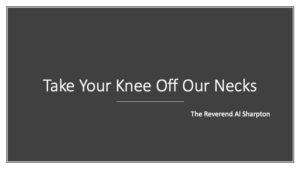 The Reverend Al Sharpton’s eulogy for George Floyd asked white America to take their knees off our necks. Our family history provides at least five disturbing examples of a knee being placed on our necks with the purpose of trying to control and destroy us.

My sister, Okella Trice, who is our family genealogist, has documented how white America placed their knees on the necks of our family.

Her research shows how, in each generation, our ancestors embraced the American entrepreneurial spirit and built businesses — even communities.

Each time the knee of vicious white destruction wiped out our families’ ability to amass and transfer generational wealth.

And yet, after each time there was a knee placed on us, we pushed it off and stood up. Today we’re still taking knees off our necks and standing up.

The first knee was enslavement.

We were among the skilled labor stolen to build wealth for white America. My mother’s ancestry is Nigerian (Fulani & Hausa) and Liberian (Kru). My father’s lineage is Nigerian (Yoruba and Hausa).

We know our African Ancestry lineages because of the work of yet another family entrepreneur Gina Paige (www.AfricanAncestry.com.) Gina is a descendent of these Nigerian and Liberian men and women and their progeny.

Second.  “Israel on the Appomattox” was a multi-racial community in the heart of the Slave South from 1800-1865.

Richard Randolph (a cousin of Thomas Jefferson) welcomed freemen and ex-slaves to live on his land.

The end of the Civil War brought the “knee of destruction,” which denied our families economic justice and undermined the existence of this community.

Third. It happened again in the early part of the 1900s in Bluefield, Virginia.

Our mother’s grandfather, Nicholas Allen Saunders, learned to make bricks through a correspondence course.  He built his home, trained his sons, and they built their homes. He and his friends invested in a soda bottling company and spent time in court to learn the legal language and business law. Nicholas was an informal community banker for his neighbors as well.

The community grew to include a school, churches, a convenience store, preachers, teachers, midwives, gardens, a tennis court, and a baseball diamond.  My mother who was born in the early 1920s, and she still fondly members those days.

The envious white community used the power — the knee of –eminent domain under the guise of expanding the railroad to destroy our thriving community—no railroad of course.

And today as my mother in her late 90’s looks backs, she asks a question laced with both frustration and anger: Why won’t the white man let you have anything?

Fourth.  Around the same time as Black communities were being established in Bluefield, the 1914 destruction of Black Wall Street in Oklahoma occurred.

This time “the knee” added a new twist. Whites bombed the Black community with dynamite dropped from planes. It’s historically inaccurate — and a typical dismissal of the trauma of racism — that the first bombing of Oklahoma City was in 1995.

In Oklahoma City, in 1914, ancestor Roscoe Dungey founded “The Black Dispatch” — the first Black newspaper in his community. Dungey lived 90 miles from the bombing of “The Black Wall Street.” He lived the trauma of covering one the worst of all-too-frequent destruction Black Communities.

Fifth. My parents purchased a home and two businesses.

The knee that limited the expansion of their wealth resulted from redlining in real estate and discrimination in banking.

For Juneteenth 2020, we acknowledge our African ancestors.

We don’t know their names because the white enslavers stripped them of their names, along with separating them from their families, their language, and their belief systems.

We celebrate the names we know — Dungey, Palmer, Saunders, and Paige.

We remain a family of entrepreneurs.

We honor the resistance and resilience embodied in Juneteenth and formally join the resistance sweeping the world today to take the knees off our necks and the necks of everyone.