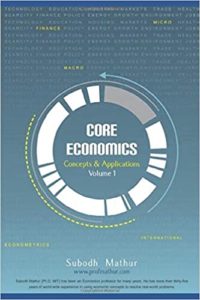 Have you ever wanted to explore how economists think and apply their ideas? Check out “Core Economics – Volume 1″ by Subodh Mathur. It’s available on Amazon.com

Subodh and I have been colleagues for several years. Around 2007, we began collaborating on projects, particularly in the area of energy and public utilities. We have expanded our collaboration to include forensic economics.

For many years we’ve discussed early versions of this project. So, I’m delighted to see it come alive as “Core Economics.”

As I read through the text, I began to say to myself: So, this is what and how economists think?

For me, the book is useful because it distills ideas and themes that cover a period starting with Adam Smith in the late 1700s to today.

However, as I was reading through the core concepts, I was yearning for something to tie together this vast sweep of economic thought.

While Mathur promises a “volume 2,” we might need a “volume 3” as well. In that volume, he would provide a narrative about how the “core principles” have been tested over over time.

Example 1: What has been the evolution of the Ricardian idea of comparative advantage? How did we go from free trade to globalization to deglobalization?  Who has benefited from the claimed benefits of “free trade?”

Example 2: We have Friedrich Hayek (interest rates), Milton Friedman (money supply), and Myron Scholes & Robert Merton (financial transactions & risks), yet we’re still recovering from the 2008 financial crisis. Our profession got a “black eye” for missing the coming of that crisis.

Example 3: How useful is it to use economic models of behavior (Adam Smith; Alfred Marshall and Richard Thaler) like “cap and trade” to reduce pollution, particularly given the alarming rate at which the average temperature of the earth is rising?

Other examples include:  What are we leaving out given the way we measure the Gross National Product (GDP)? To what extent is poverty & inequality a “built-in feature” of how we design our economic system?”,Getting back to “volume 1,” Mathur introduces us to Kautilya, who was an advisor to an Indian Emperor about 2,300 ago. Kautilya wrote “The Art and Science of Money,” Mathur informs us. This little-known fact reminded me that “all systems” have their “economic thinkers.”  What Mathur distills in “Core Economics” are the economic ideas that have come about as a result of how today’s dominant system has arisen and evolved.

“Core Economics” is also a “part” memoir. It reflects how Mathur has and continues to use “economic thinking” as a researcher, policy analyst, teacher, blogger, and author. He is keeping the tradition of Kautilya alive.

Despite economic ideas being contested ones, Mathur and I will continue to highlight and apply the core economic concepts he presents in his book, as well as others, as we continue our consulting practice.