To My Surprise…A Delightful Class With Celine
July 30, 2020

To My Surprise…A Delightful Class With Celine 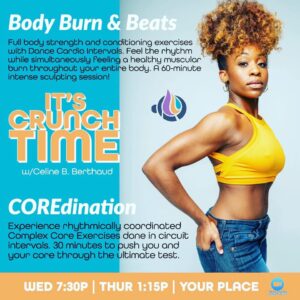 In last night’s “Body Burn & Beats with Celine Berthaud.” I felt like the proverbial granddad being led out to the dance floor by his granddaughter. The generational gap was very wide.

While I can “still move,” I can’t move like that.

In fact, I couldn’t move like that when I was her age, which meant I couldn’t even wish for younger days.

So metaphorically speaking, I found my way back to my table to watch and absorb that generation’s vibrations and energy. The world is in good hands. I’m at peace.”

I had no plans of taking another one of her classes. So, when I saw that she was substituting for Kendra in DRIP’T, I was reluctant to register for the class, but I did.

As Celine was checking the video and audio connections, music was pumping. It contained lyrics that were jarring to me. However, instead of turning off the camera and signing off, I decided to give the class a try.

The class was “delightful.” That’s right.

What was particularly pleasing?

She didn’t play any music during the class. I know most folks prefer to work out to music, and I honor that. However, given all my “latency challenges,” I’m always struggling “to hear” the instruction over the music. So, I welcomed this “music-less” class.

Even though I could hear, I still struggled to get quickly into a routine. I felt like the first set was always over before I could set up.

Overall though, I could almost “keep up.” Imagine that!

One hundred six (106) days of consistent practice of yoga, hot Pilates, and DRIP’T since April 15th has made a difference.

Who knows, I may be daring enough to try Celine’s HITT COREdintation class.