Week one is under our belts. We received a lot of positive responses on the submissions by Gordon Basichis Rewards, Epiphanies & Recognitions: Mixing “Mystery” To Life And Living and from Okella Paige Trice Race, Identity & Fairness: Tensions in the Quest for Social Justice in my Life and America’s. Also, folks are still watching our inaugural FB Live.

Because of the contrasts, a question I got was: Did I plan the appearances that way? No. What happened was that Gordon was the first to submit; Okella, the second.

Gordon writes of “mystery.” How’s this for “mystery.” While we both graduated from Germantown High School (1965), we didn’t know each other then. I became acquainted with Gordon through the FB page of a mutual FB friend. We would respond to each other’s posts. It was during those exchanges that I realized attended high school at the same time. We ended up on a FB Live together. How did that happen?

While I didn’t remember Gordon, he thought I was “Jimmy Page,” who was our class president. He hasn’t been the only to get us confused because of names. Jimmy & Billy Page are brothers. James & Jerome Paige are brothers.  Sadly, Jimmy passed away a couple of years ago.

Gordon said he was a “truant” in high school. Several folks responded they were too. I don’t think I knew much of anything about “being a truant.” In the FB Live (scroll down to the bottom of the page) Gordon outlines an adventure continuum, he was on the end of being most adventurous. As I was listening to him talk, I placed myself at the “least adventurous” end.

This is how Gordon begins his submission:

My life has been “eventful.” Eventful can reap its own rewards, but it can often inspire remarkable epiphanies as well as terrifying recognitions.  Such is life, and life, in my view, should be lived so that one’s accounting should be based on perceptions of mystery that accompany the practical applications of achievement and failure. Perception, as such, is to recognize the often strong but intangible currents of fate and circumstance that appear before us, much like the choices in the Tao—as you travel the river, one is confronted with choices and challenges.  How one deals with the results in one’s destiny.  In short, there are no accidents, but opportunities that are either seized or ignored

This is how he ends it:

Generally, I try to avoid the sentimental or the nostalgic.  The idea is to keep moving forward and not look back under the illusion there were better times than the present. Take risks, have fun, and let the adrenalin pop right through your system.  Life, with its omens and signs, offers its own guiding force. Without reading the tea leaves, I would have been elsewhere.  To quote James Dean— “Dream as if you will live forever.  Live as if you’ll die today.” Amen. 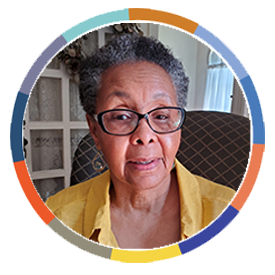 Germantown, the neighborhood and the high school conjure up pleasant and unpleasant memories. Growing up in those places and spaces, I had to confront the tensions between race & identity and racism & fairness in myself and American society. These tensions have been a subtext for my life and the basis for my continued work for social justice.

Here are some of the things Okella remembers about high school:

As I was reading her list, I remembered a lot of these things too. A year or so ago, I was in Philly and stayed in the PFSF building, which is now a hotel. I thought about the “Wishing won’t do it, savings will.” We participated in a Christmas Savings Program. We saved money during the year, to have funds to spend around Christmas time.

At 76, I know change has occurred. I’ve seen and lived it. But I also know that the more some things have changed, the more others have not. For example, systemic racism continues to exist. It’s been over 400 years since the recording of enslaved Africans in Virginia. And, since March 2020, we’ve been trying to deal with the pandemics of health and racism, the age-old tensions between racism and fairness have, and those tensions have sparked protests across the country.

Come November 3, 2020, I will cast my vote for the fairness principle — “do unto others as you would have them do unto you.”  Because I wake up each morning with my mind “stayed” on justice.

As I’ve read and edited the submissions, memories that I didn’t know I had surfaced. More about those as the project unfolds. Check out the submissions, and if you’d like to share your reflections email us at info@paigeandassociates.com.