An Immigrant from India 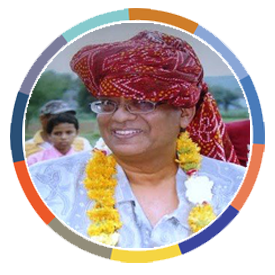 Looking back, life in India was entirely physically and socially different from my life in the United States. However, adapting to life in the US was not difficult. It has been a pleasant and rewarding journey for my family and me. However, in recent years, we have become increasingly concerned about persistent racism in the US.

Growing up in small, remote towns in India

I was born in Alwar, which used to be a small Princely kingdom before India became Independent in 1947. Even today, Alwar, in Rajasthan State, is so obscure that it is unknown to most people in India. My oldest brother, who was born in 1940, grew up for many years without electricity in our home. My father was a senior, leading government officer, whose job required him to move to other cities in Rajasthan. He next moved to Jhalawar, an even smaller city. For what life was like, see this story written by my two oldest brothers. (Click here.)

We did not have a radio or a TV in our home, and even the newspaper (from Delhi, no local paper)  used to come two days late. So, in a physical sense, we were cut off from the world.

But, it did not matter. My father was a well-educated person, and my mother had a high-school degree – rare for Indian women of her cohort, most of whom were barely literate. So, the atmosphere at home was all about learning and education.

We finally moved to Jaipur, the capital of Rajasthan, and now a major world-class tourist city, in 1958, and I graduated from high school there. Now, we did have a radio, and we used to listen to British and American radio stations for entertainment. For what gave me a thrill, click here to see.

And, the home atmosphere was all about learning organically – it was just in the air.

Our school, which ran from elementary to high school, was run on strict authoritarian lines. You spoke to a teacher only when the teacher asked you to speak. The teaching focused on rote memorization, not on creative thinking. I had even memorized several log number tables for math class – just to be fast in doing the math tests.

I did not face any issues in high school. As one of my school mates recently said, by Grade 6, it was clear that I would be the top student in my class. Not that it meant much because we were students in Jaipur, a small, backward city, and not in any of the top-ranked schools in other Indian cities. And, sure enough, my high school scores were much lower than the scores of the top-ranked students in India who took the same tests. In US terms, if they had an A grade, I had a B+, just missing A-.

Yet, in the end, this combination of strict schooling in a small city and our home atmosphere worked for my siblings and me – we were able to do well in academics and the world.

I had no significant issues when I graduated from high school. The standard path at that time for bright Indian students was to become an engineer or a doctor. The doctor’s path had ended for me in Grade 9 – a very rigid system. So, the only real option was to be an engineer. But. I did not want to be an engineer. Somehow, I resisted the social pressures and did not even apply – I was afraid I would be accepted. Instead, I chose to become an economist.

Well, that’s an overstatement. At that time, no one could do anything with the parents’ OK. So, my parents agreed to let me study economics.

I attended one of India’s leading colleges, living in a dorm. No student had a radio. There was one black and white TV in the dorms, which had mainly Indian programs. However, the library had daily Indian newspapers and some Western magazines.

The courses were easy because they were aimed not at the students in this college but at the average student in Delhi. So, academic life was not difficult.

The big burning local social issue was the attraction of Communism and Socialism. It had an Indian variant called Naxalism, which included violence. Some students did become part of this movement. And, we were exposed to the “1960s” – Western music, “Vietnam,” the unrest in Chicago, Martin Luther King, Jr.  Of course, from a distance, and in a limited way because there were no regular reports on Indian TV, and no one had a radio.

I was not a diligent student. I missed many classes because I could learn from books on my own. But, it was not hard to get good grades, though the college had the top-ranked students from the top-ranked Indian schools as competition.

When I finished college, the choice was between looking for a job in India or going abroad for a Ph.D. I decided that I would choose the latter only if I were admitted to a top university.

But, I had to pay for the GRE test – no fee waiver. No money to buy a GRE test prep book. Forget about prep classes – none available. Still, I did well enough to get into MIT.

The academics at MIT were not significantly different from the academics in Delhi. But, life in the US – totally different from life in India. Impossible to figure out US life on your own. Fortunately, the Indian students at MIT – mostly engineers – had a well-functioning institution and camaraderie, so it was OK.

While I was still a student, my future wife graduated from Brown and came to MIT for her Master’s and Ph.D. That was the best part of being at MIT!

My wife and I have been very happy to live in the US. Apart from everything else, we have had the opportunities to use our time in ways that would have been impossible in India or most countries. Most of the people from India that we know in the US have high levels of education.

Our daughter is a lawyer who works for the non-profit Bronx Defenders, putting in around 70-80 hours per week for about 40% of what her law school classmates make. Our son, who cruised along in high school, woke up in college, became the college band’s pianist (did not even audition in high school), and is now doing a Ph.D. in Chemistry. He has become a “lab rat” – spends 70-80 hours per week in the Chem lab.

In short, most of my cohort of immigrants from India are leading good, productive lives with their kids pushing ahead. My daughter is now better than me at Scrabble and crosswords, and my son is ahead of me in Sudoku – which makes me happy.

In recent times, all of us have become much more sensitive to persistent racism and its harmful effects on life and accomplishment in the US. At the same time, we cannot believe our eyes and ears when we see the Republican Party rolling out their Indian woman, Nikki Haley, to compete against the Democratic Party’s Indian woman, Kamala Harris.  Impossible to have even dreamt of it when I was in India!

What am I doing now?

I recently completed a book,  Core Economics It is economics written for non-economists in simple language with minimal mathematics. One of the reviewers on Amazon wrote: ” Core Economics is an interesting read with excellent content and explanations of economic theory. Using real-world examples, this book is able to explain the most complicated theories in a digestible format. This is a very informative and enjoyable read.”