I Got By, With Lots of Help 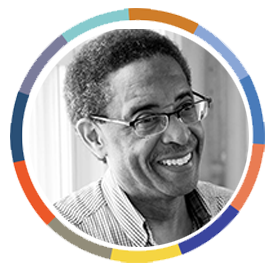 In 1965 I graduated from Germantown High School in Philadelphia, PA, uncertain what life would bring. Now at age 72.  I have no plans “to retire” in the traditional sense of that term.  I’m looking forward to at least four more decades during which I’ll continue to navigate spaces, explore new — competing and conflicting   — ideas, live authentically, and lift others as I continue my “climb.”

I’m a 72-year old African American male who, 55 years ago, graduated from Germantown High School (GHS) in Philadelphia, PA, in 1965. Except for 18 months, I’ve lived in Washington, DC since then. I have no plans “to retire” in the traditional sense of that term. I’ve been married since 1967. My daughter is President and Co-Founder of www.africanancestry.com.  As exemplified on the website that I launched on June 8, 2020 (www.wojm.com), my interests range widely. I’ve served on boards and commissions that have included neighborhood and city-wide groups. Today I serve on one local and one professional board. My career has included being a faculty member and campus administrator and an economic, business & organizational consultant (Jerome S. Paige & Associates, LLC (www.paigeandassocites.com). I’m a practicing forensic economist. At some point, that will stop, but I’m looking forward to at least four decades of an active life.

When I look back on my high school days, I see I’ve always been navigating spaces.  Think of my life as a “Venn Diagram.” Some of the areas have been simple, with few interactions; others, more complex and complicated, with lots of engagements.

For example, while GHS appeared to be an “inter-racial school” while I was attending, it was a school that was racially in flux. While I was aware of “race” in high school, no doubt, I followed unwritten codes. For me, there was inter-racial socializing in class and clubs, but not outside of the school.

There were the “normal” phenomena that we have come to know as “living while black.” Fortunately, my encounters were “nuances,” rather than “threats,” except one time in Philly, I had to file a complaint against a landlord because they didn’t want to rent their apartment to my wife, daughter, and me.

Often, I knew why I was in the room and why my presence was essential and necessary.  For example, as juries were in flux, lawyers needed Black forensic economic experts to relate to the jurors. That demographic change launched a successful forensic economics practice for me.

A current example of me working with honoring differences in ideas comes from my family’s weekly Zoom check-ins. We have discussed – War & Peace by Leo Tolstoy and Caste by Isabel Wilkerson.

Ironically, as a kid, I don’t remember anyone reading to me or learning how to read. However, as I was composing this blog, I realize for the first time that my parents were “nerds,” if we use a new term. They were “Bible Nerds” or “Christian Study Nerds.” We spent a lot of time in church and church-based activities: Sunday School, Baptist Training Union, Sunday Services, Scouts, choir, Vacation Bible School.

In addition to my school “curriculum,” there were church and home curricula.

My parents were students and teachers of the Bible. With his 8th-grade education, my father, and with her one year of college, my mother became”religious, and community thought leaders.” Members of our community sought them to interpret the Bible and apply Biblical wisdom to their lives.

I recently began to view my high school education as an eclectic one, including woodshop and geometry, electric shop and biology, and metal shop and French. In retrospect, eclecticism has been a sub-text to my life. Sometimes it was unfolding as a satisfying feast like a smorgasbord, and at others like a mixture of incongruent elements.

When I entered HU, there was still in place what would be called the standard liberal arts curriculum. I took courses in the physical and social sciences, language and literature, and physical education.  Since I had studied French in high school, I met my HU foreign language requirement by taking French literature courses in translation.

I started at HU in 1965. After my interlude that included marriage and a new child, I returned to HU and focused on economics and accounting. I graduated in 1971.

By the time I finished Howard, the Black Studies Movement had swept across the campus. My interests became more Afro-Centric.  The deaths of Malcolm and Martin, and Medgar stunned many of us. We were angry because of the children, women, and men who lost their lives because they made “good trouble” on our behalf.

The operative concept when I entered the master’s program at AU was “paradigms.” We all had to master Thomas Kuhn’s “The Structure of Scientific Revolutions.” One fascinating concept to me was “commodity fetishism,” which is a crucial concept in the works of Karl Marx and Fredrich Engels.

In my neighborhood reading group, I have the reputation of being the “known world guy.”  Here’s an example of why I have that reputation.

During my organizational development consultant phase, I would “tease” workshop participants by emphatically stating that for them “to think outside the box,” they first had to understand the box they were thinking inside of. Because if they didn’t know their “box” (their known world), they couldn’t think outside of it, and they were limited in their ability to break their chains of mental illusion. They would remain “stuck” when they could liberate their minds, themselves, and others.

I’ve learned that we have “to forever fact-check” what we believe and why. We need to do this to continue our cognitive development.

Because of my eclecticism, sometimes l felt like I was a mile wide and an inch deep, which meant I had “closure issues.” I was often off to something new before I finished what I was working on. My eclecticism also caused me to play the role of an “extrovert” when, by temperament, I’m an “introvert.”

There’s always been a “publicness” about being the son of James & Nannie Paige in Germantown, whether in our church community or the three family businesses – the barbershop, take-out, and corner store.

Sometimes, it felt like my “steps” were being “ordered.”

Here’s an example: I had applied to three graduate economic programs – St. Joseph’s University and the University of Pennsylvania, both in Philly and American University in DC. St. Joe’s and UP rejected me, but AU gave me an excellent financial package.

AU had received, at the last minute, some money to recruit black students. So, they offered scholarships to a couple of other students and me. They didn’t know for sure whether we were”black.” They went by the colleges we attended and where we lived. They rolled the dice, and I came out a winner. I would go on to earn a master’s and a doctorate.

Who am I? Sometimes, I don’t know, but my friends and colleagues accept who I am without criticism or hesitation.

As I look back, I see my life as providing an example of why it’s crucial to have chances, opportunities, and safety nets.

The more my mother ages (she’s 97), the more saint-like my siblings and I become — Lake Wobegon-like — with each passing day, more beautiful, well-behaved, smart, and successful than the children of her contemporaries.

We are her “wildest dreams.”

She had a lot to do with manifesting her dream for her children. But other mothers and fathers also had dreams. Unfortunately, many of their sons got wiped out by the Vietnam War or by protesting the War at Kent State and Jackson State. We are too familiar with the data on the high incarceration rates of black males. Too many sons and daughters in my generation become the victims of drugs, neighborhood violence, AIDS, unemployment, underemployment, police killings, and racial injustice.

I’ve not been solely responsible for my success. I’ve been the beneficiary (i) of all the past and current struggles for racial justice and equality, (ii) of being a child of the 1950s and 1960s struggle for civil rights, (iii) of an expanding Post-WW II economy and opportunities, and (iv) of having had and continue to have healthy family, church, and support from many different communities as I traverse school, work and the world of ideas.

Fortunately, I’ve been able to ride the waves of change without getting capsized. My minor stumbles never escalated into major, detrimental life events.

Life is full of traps. Fortunately for me, I’ve been able to get “the bait” (the nourishment) without getting tangled (“caught”). “The 1960s Project” (www.whatsonjeromesmind.com/1960s/) and its ancillary activities are two examples of how I continue to “hold space” so that Sankofa-like, we can look back to move forward.

We have to be able to hold different and contradictory claims in our minds, to come to grips with any internal dissonance that might cause, and to be able to imagine and work for new possibilities.  We don’t have to be “stuck.” With every problem, a solution co-arises.

Since we’re evolutionary beings living in an expanding Universe, all “normals” are new ones. Consequently, we have to become adept at knowing how long to hold onto “the known” and when to grasp “the unknown.” When the old is fading, and the new is coming into view, a moment of true freedom of choice appears.

In the words of Mary Church Terrell, because to whom much is given, much is expected, we have to continue to lift as we climb.