North Portal Readers Selection: God’s Jury: The Inquisition and the Making of the Modern World

Thanks to Linda for hosting our meeting. “Leisure World” has quickly become the desired spot to hold our discussion as Linda goes beyond the “call of duty” to host and feed. We welcomed two guests. “Carl,” who has attended a couple of discussions, and “Maries,” a first-timer.

About a week after our meeting, I completed reading “God’s Jury,” and I was struck by how well our discussion covered the book. But, as usual, I’m not sure how much my summaries reflect our conversation and how much they reflect my “rambling mind.” 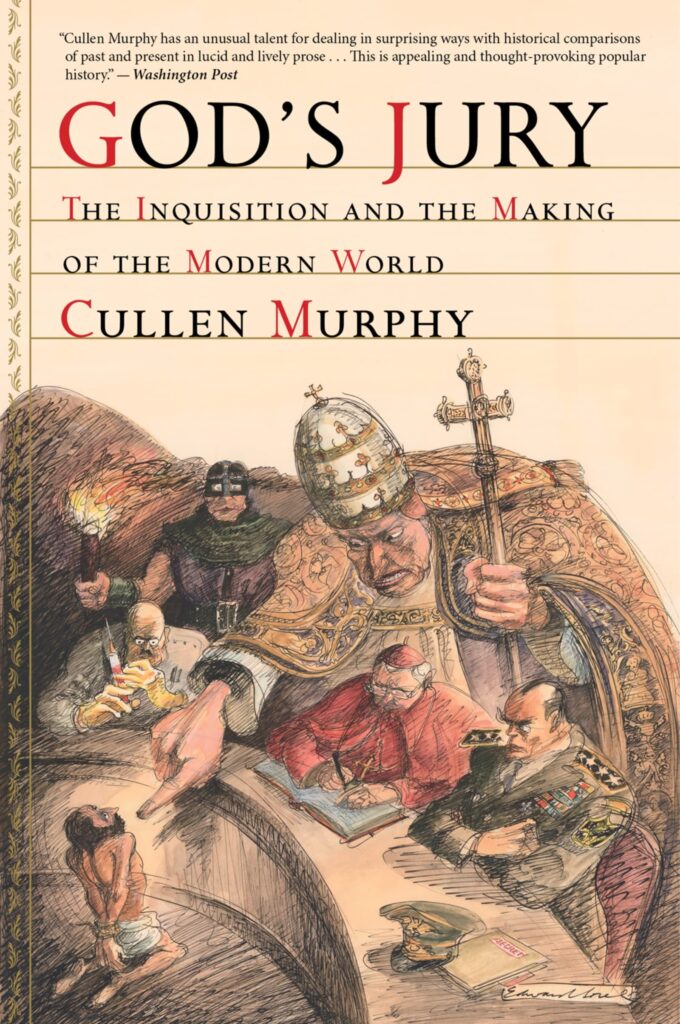 There was a consensus that this was a book that no one of us would have likely read; however, we were glad that we read it. While fundamentally and substantively, the author examined historical themes, he presented them in a way that we could see the issues unfolding today. An intriguing aspect of the book was how easily Murphy moved between the historical and the current, showing similarities and trends.

Murphy constructed his narrative in a way that we were reading history while at the same time we were watching it repeat itself today. We were impressed with how Murphy could cover such a span of history and a vast array of themes within a relatively few pages and present that history and themes in a very “accessible way.” It was an “easy read,” even though, at times, it was a “troubling one,” as the author described some torture scenes.

There was another consensus: Murphy’s insights apply today in many ways. We are witnessing “fundamentalism” of all sorts. The “true believers” deny the space and the acceptance of beliefs for those who are not. We’re watching the inquisitional nature of events (secular and sacred) unfolding before our eyes.

More than a “Jury”

One of our discussion’s opening questions was about the book’s title. One Reader suggested that the title should have been: “God’s Judge, Jury & Executioner.” However, within the context of the book, not only had “God” been the judge, jury & executioner, the author provided significant analyses and insights into how both the “religious” and the “secular” models of “inquisition” originated, unfolded, and sustained.

Making of the Modern World

One key innovation of the “modern world” is the social institution called a “bureaucracy.” One characteristic of a bureaucracy is that it allows for hierarchical control. It provides for management and coordination over space and time.

Murphy examines how the Catholic Church developed the organizational structures to spread and reinforce its doctrine throughout Europe and the world.

As Murphy noted, “inquisitions” come in all shapes and sizes. But it remains “modern” in that it constantly hones its control mechanism.

There are many examples of religious fanatics “the true faith,” including or excluding.

Murphy also explored how over time, religious regimes and so-called “secular governments” worked to gather to forge their separate and collective agendas.

As the author noted, “state inquisitions,” independent of religious ones, have sought to protect the state and its interests. Also, “economic regimes” – communism, capitalism, and fascism — all used “inquisition-type techniques” to ensure the perpetuation of those in power.

These historical and contemporary examples made Murphy’s book more troubling for us “Readers.” We witnessed the rise of the so-called Political Right in the United States and how they attempted to use the local, state, and federal governments – and the courts — to force their agenda on all Americans. What did they want? To deregulate our economic lives and regulate our social, cultural, and religious ones.

We Readers were also concerned about the current practices of “extraordinary rendition” (and Drones) and the passage of federal laws that “legalize” expansive use of “the US government inquisitions.” For example, the “Patriot Act” expands the basis for a government-sponsored “surveillance society.” And when combined with all the commercial forms of tracking, “high-tech inquisitions” become increasingly possible. Again, Murphy used the example of how technology like “Kindle” can be used to “remove ideas.”

We noted that all societies need some form of “social control.” However, as Murphy points out that when “control” moves beyond “social,” it becomes “control for control’s sake.” Like the pre-modern bureaucracy of The Inquisition, the only purpose seems to be the perpetuation of the bureaucracy itself.

At another point, “social control” becomes a basis for distrusting one’s neighbor and for instilling “fear” – fear of a neighbor, fear of a friend or family member, fear of “the other” (racial, ethnic, religious, language, etc.)

Another way in which the “institutions of inquisition” were “modern” was in their “record-keeping” –from handwriting to large electronic databases. The presence of “archives” provides many details about religious, secular, or economic inquisitions. To paraphrase another of our readings, “the medium becomes the message,” in this case, in many unpleasant ways. Murphy’s history becomes a history of “archiving.” Bureaucracies like to keep records.

Pre-Modern: Murphy, as well as others, suggests that “fundamentalism – religious, secular or economic” — stems from people taking “ideas” as “ultimate truths.” There is little effort to explain or test “ultimate truths.”

In this sense, “inquisitions of all types” are “pre-modern.” The “pre-modern” is driven by “metaphysics” – by myth. Metaphysical ideas are ideas that we don’t have to test. We can believe in things that we don’t understand. “Superstition is the way.” (Stevie Wonder)

Modern: “The modern” indicates that we should only believe what we can test.

Science advances by “disproving” previous ideas. We should express ideas in a strict scientific criterion so they can be “falsified.” In this approach, science moves forward by “disproving,” not by “proving.” Fundamentalists and metaphysicians “take a beating” under modernism. “Reason” trumps “myth.”

Post-Modern: The post-modernists remind us that all ideas (beliefs) – pre-modern and modern — are “socially constructed.”

For example, the elimination of slavery, the removal of the system of Jim Crow, and the creation of a regime of “civil rights” challenged the sensibilities of an “old normal.”

Michele Alexander, in her book – The New Jim Crow; Mass Incarceration in the Age of Color Blindness – provides a fascinating study of how one system of social control – Jim Crowism – is replaced by another – mass incarceration. (http://www.youtube.com/watch?v=IgM5NAq6cGI).

The “inquisition” never “sleeps.” Therefore, we must be ever vigilant.

Mystical: The “Mystics” constantly remind us that we live in a “world of illusion” and that “nothing” is ever what it seems.

Consequently, we are prone to “idolatry.” We often turn our power over the things we created and forget we made them.

Rise and Fall of Protections Against the Inquisition

Murphy’s book is also part of political and legal history. After reading his book, we understand:

Today, these “protections” are whitling away as new forms of “secular and religious inquisition” take hold in the United States and worldwide.

Some Other of Our Readings

In a number of our past readings, we have explored how “ideas” come into being and often “take over,” setting people and society on a new trajectory: “A Mercy” (Morrison); “Balzac and the Little Chinese Seamstress” (Sijie); “Inheritance of Loss” (Desai); “Invisible Man” (Ellison); “Poisonwood Bible” (Kingsolver); “Someone Knows My Name” (Hill); “The Girl With The Dragon Tattoo” (Larsson); “The Known World” (Jones); “1984” (Orwell); and “Palestine: Peace Not Apartheid (Carter).”

In each of these, the forces of ideas and institutions get merged. They come together to thwart individual and group expression and submerge individuals and groups to the dictates of a “social machine” that gets perpetuated through co-option, fear, and force.

Prospects for a Post-Fundamentalist World

Here’s our puzzle; we need beliefs. They guide us. But, when we start believing in our ideas, we set ourselves up to be “inquisitorial,” no matter who we are.

Murphy, as our group noted, focuses on “humility” as an antidote to “inquisitions.”

Humility, transparency, and accountability are the antidotes.

They help guard against our “inquisitorial tendencies.” They assist us in stopping the perpetual cycle of “man’s inhumanity to man.” They help us guard against becoming “inhuman,” all in the name of a set of ideas. Finally, they keep us from killing (metaphorically and actually) in the name of “God.”

In the Vice Presidential debates, Vice President Biden provides a helpful guide in answering a question. He indicated that he is firmly grounded in Catholicism but thought it was inappropriate for him to impose his beliefs on someone else.

Murphy challenges each of us to come to grips with what ideas we find “heretical.” We must constantly look out for “what pushes our buttons.” And develop mechanisms to manage our reactions so that we open possibilities rather than close them off.

Harking back to the theme above of the “social construction of reality,” in Life’s Little Deconstruction Book; Self-Help for the Post-Hip (Andrew Boyd), guide number 326 reads:

Several writers are trying to bring together in a single model the concepts (i) myth, (ii) reason (science), (iii) social construction, and (iv) illusion as they relate to religion, spirituality, and the prospects for living a world based on tolerance and peace.

For those interested in grinding their way through some of these “solutions,” below is a list of reading you’ll find interesting.